The NCPAG Working Papers are pre-publication versions of research papers by NCPAG faculty, lecturers, researchers, and students. They are
meant to disseminate knowledge and stimulate discussion that will help authors revise the manuscript for future publication. 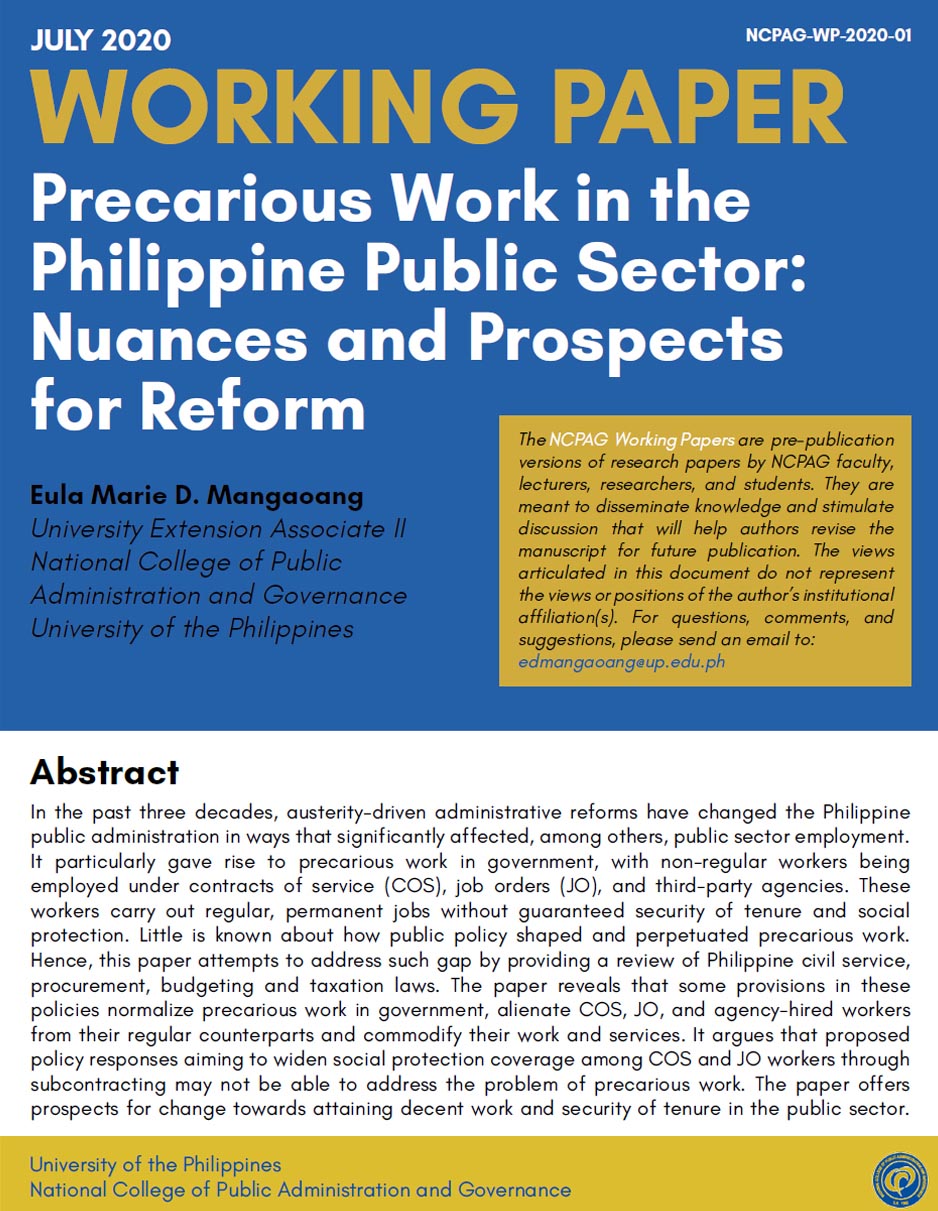 In the past three decades, austerity-driven administrative reforms have changed the Philippine public administration in ways that significantly affected, among others, public sector employment. It particularly gave rise to precarious work in government, with non-regular workers being employed under contracts of service (COS), job orders (JO), and third-party agencies. These workers carry out regular, permanent jobs without guaranteed security of tenure and social protection. Little is known about how public policy shaped and perpetuated precarious work. Hence, this paper attempts to address such gap by providing a review of Philippine civil service, procurement, budgeting and taxation laws. The paper reveals that some provisions in these policies normalize precarious work in government, alienate COS, JO, and agency-hired workers from their regular counterparts and commodify their work and services. It argues that proposed policy responses aiming to widen social protection coverage among COS and JO workers through subcontracting may not be able to address the problem of precarious work. The paper offers prospects for change towards attaining decent work and security of tenure in the public sector. 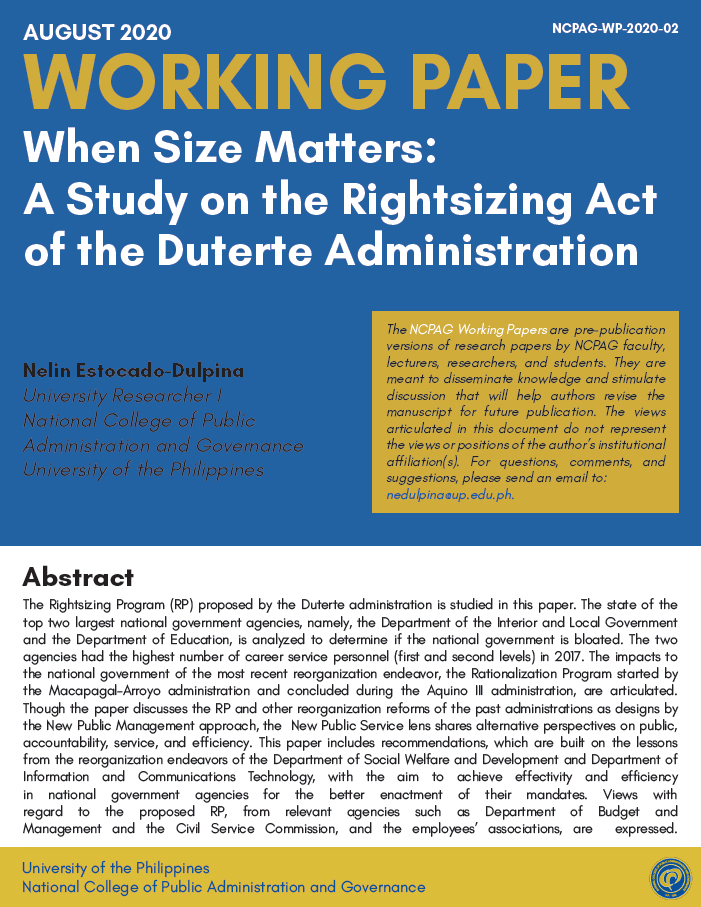 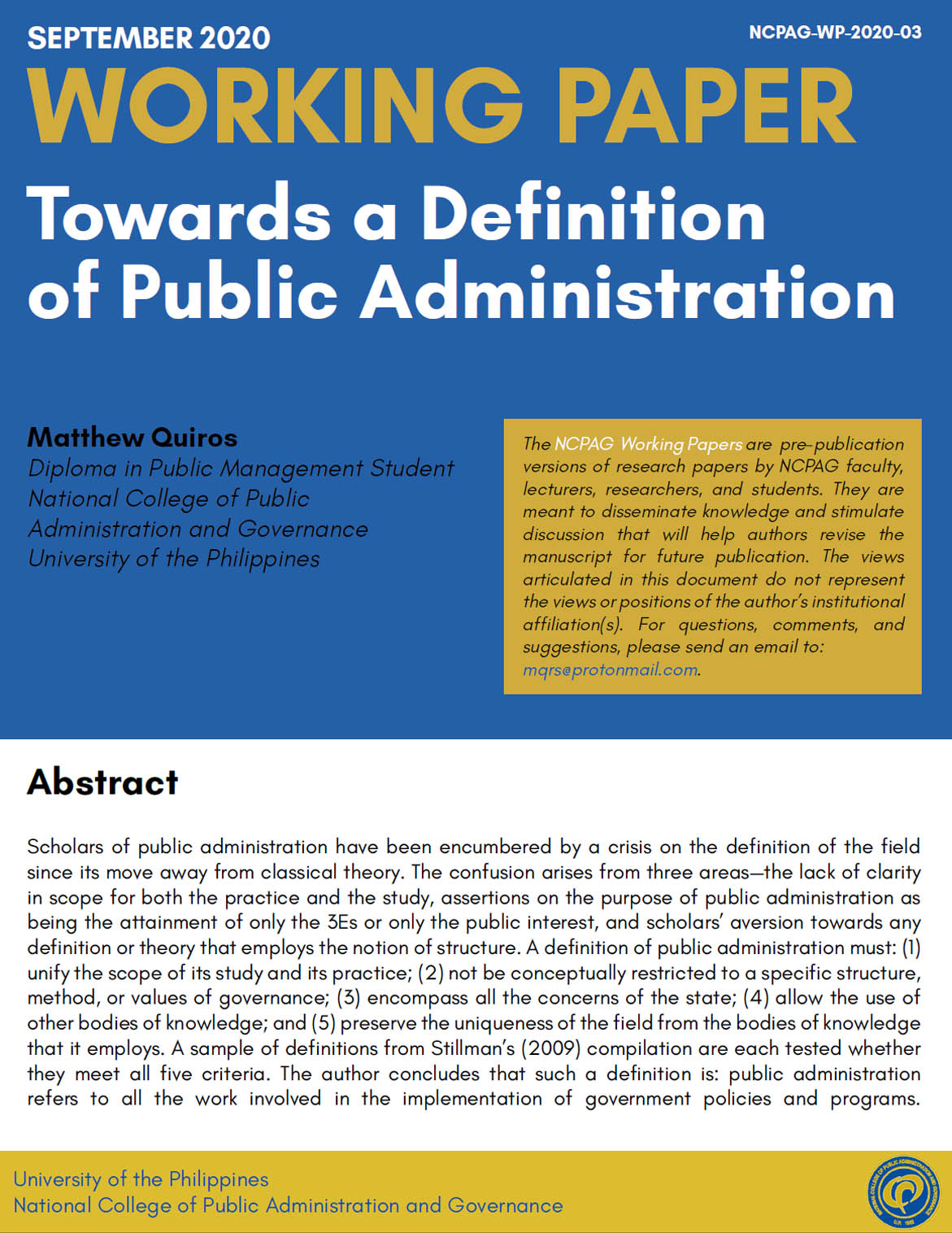 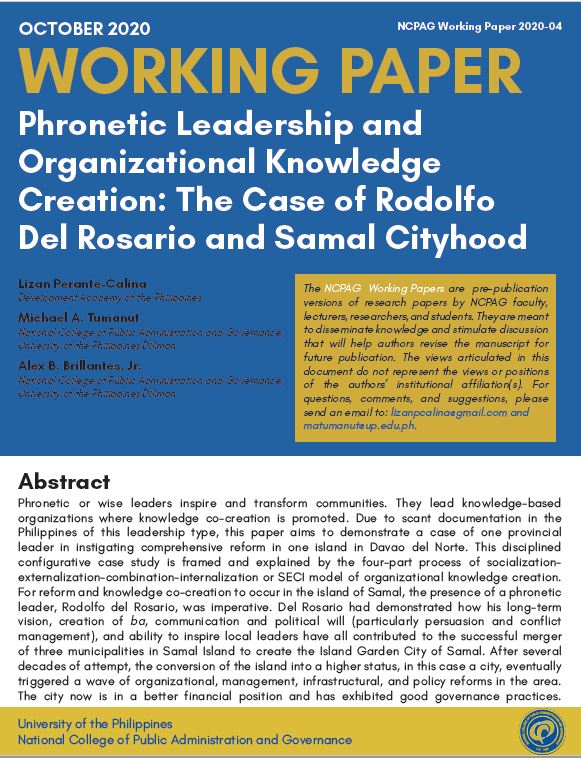 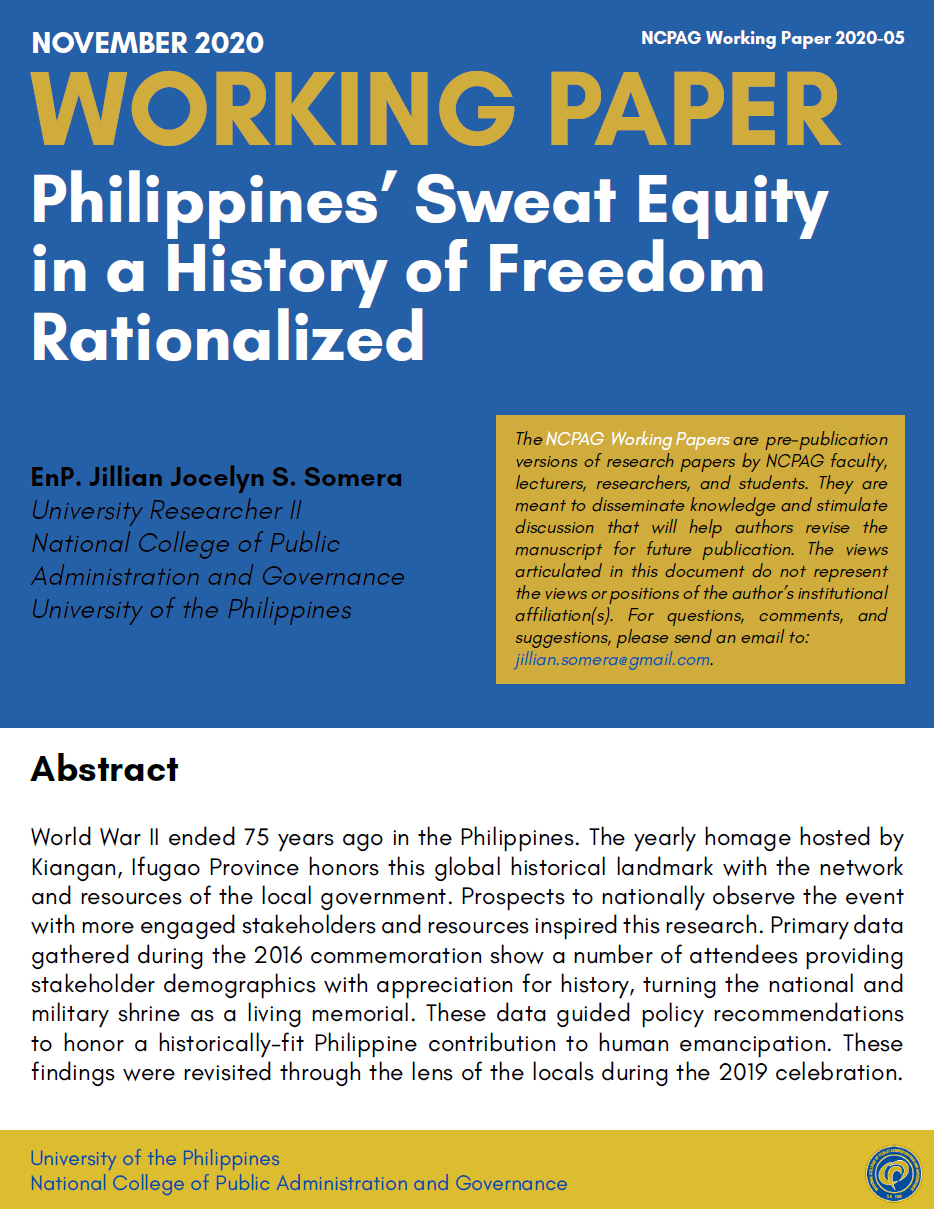 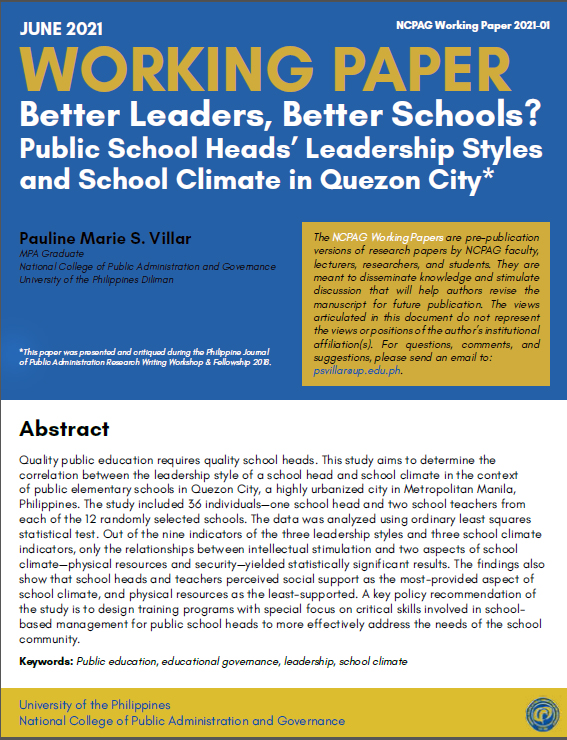 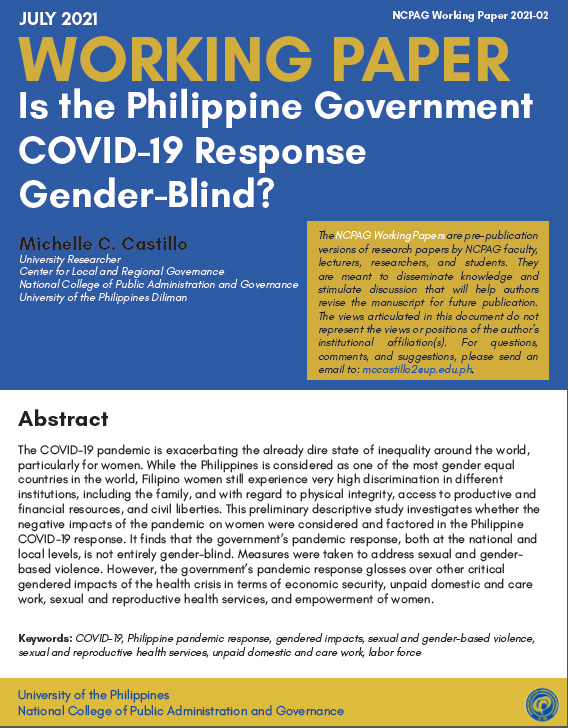 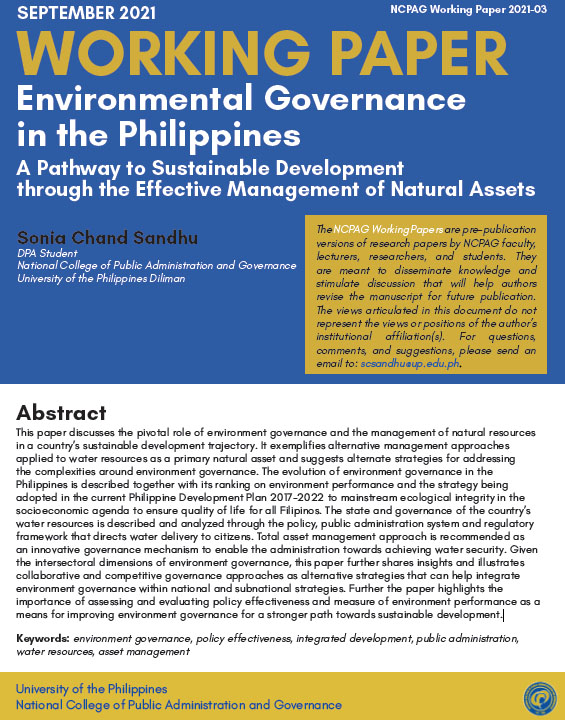 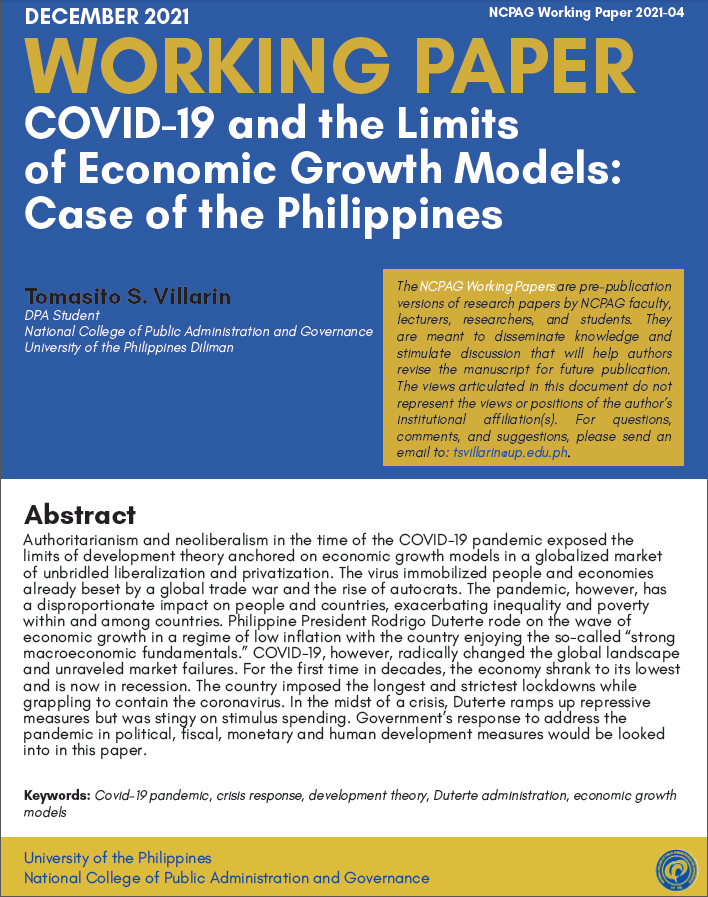 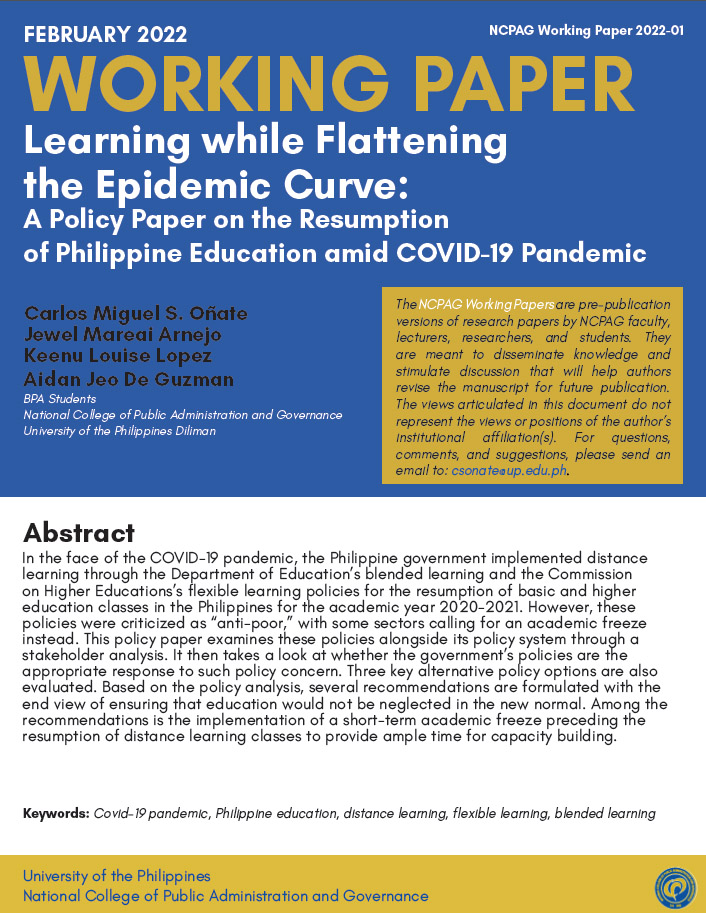 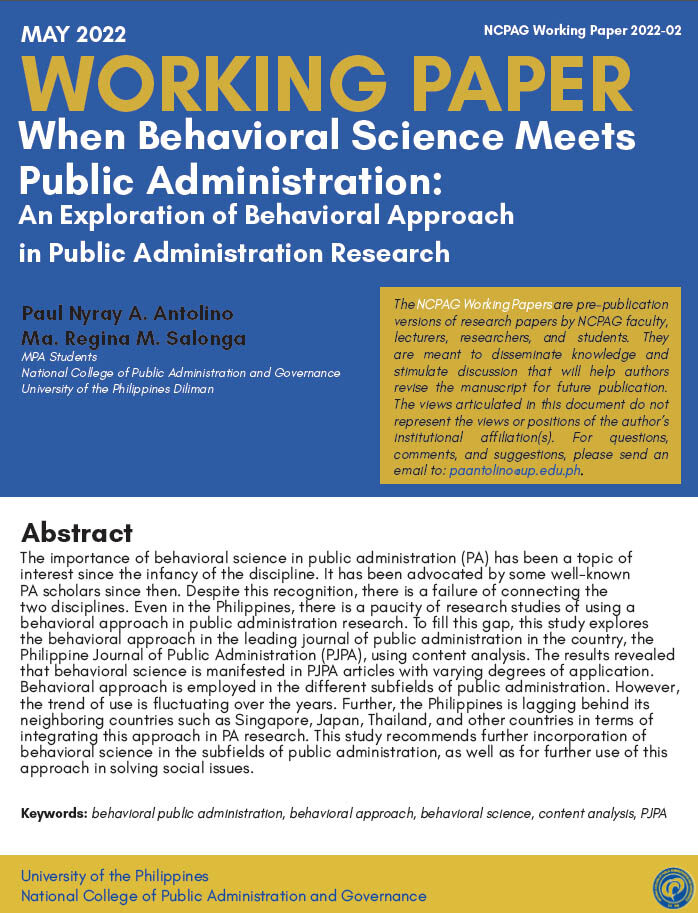 The Rightsizing Program (RP) proposed by the Duterte administration is studied in this paper. The state of the
top two largest national government agencies, namely, the Department of the Interior and Local Government
and the Department of Education, is analyzed to determine if the national government is bloated. The two
agencies had the highest number of career service personnel (first and second levels) in 2017. The impacts to
the national government of the most recent reorganization endeavor, the Rationalization Program started by
the Macapagal-Arroyo administration and concluded during the Aquino III administration, are articulated.
Though the paper discusses the RP and other reorganization reforms of the past administrations as designs by
the New Public Management approach, the New Public Service lens shares alternative perspectives on public,
accountability, service, and efficiency. This paper includes recommendations, which are built on the lessons
from the reorganization endeavors of the Department of Social Welfare and Development and Department of
Information and Communications Technology, with the aim to achieve effectivity and efficiency in national government agencies for the better enactment of their mandates. Views with regard to the proposed RP, from relevant agencies such as Department of Budget and Management and the Civil Service Commission, and the employees’ associations, are expressed.

Scholars of public administration have been encumbered by a crisis on the definition of the field
since its move away from classical theory. The confusion arises from three areas—the lack of clarity
in scope for both the practice and the study, assertions on the purpose of public administration as
being the attainment of only the 3Es or only the public interest, and scholars’ aversion towards any
definition or theory that employs the notion of structure. A definition of public administration must: (1)
unify the scope of its study and its practice; (2) not be conceptually restricted to a specific structure,
method, or values of governance; (3) encompass all the concerns of the state; (4) allow the use of
other bodies of knowledge; and (5) preserve the uniqueness of the field from the bodies of knowledge
that it employs. A sample of definitions from Stillman’s (2009) compilation are each tested whether
they meet all five criteria. The author concludes that such a definition is: public administration
refers to all the work involved in the implementation of government policies and programs.

Phronetic or wise leaders inspire and transform communities. They lead knowledge-based
organizations where knowledge co-creation is promoted. Due to scant documentation in the
Philippines of this leadership type, this paper aims to demonstrate a case of one provincial
leader in instigating comprehensive reform in one island in Davao del Norte. This disciplined
configurative case study is framed and explained by the four-part process of socialization-
externalization-combination-internalization or SECI model of organizational knowledge creation.
For reform and knowledge co-creation to occur in the island of Samal, the presence of a phronetic
leader, Rodolfo del Rosario, was imperative. Del Rosario had demonstrated how his long-term
vision, creation of ba, communication and political will (particularly persuasion and conflict
management), and ability to inspire local leaders have all contributed to the successful merger
of three municipalities in Samal Island to create the Island Garden City of Samal. After several
decades of attempt, the conversion of the island into a higher status, in this case a city, eventually
triggered a wave of organizational, management, infrastructural, and policy reforms in the area.
The city now is in a better financial position and has exhibited good governance practices.

World War II ended 75 years ago in the Philippines. The yearly homage hosted by
Kiangan, Ifugao Province honors this global historical landmark with the network
and resources of the local government. Prospects to nationally observe the event
with more engaged stakeholders and resources inspired this research. Primary data
gathered during the 2016 commemoration shows a number of attendees providing
stakeholder demographics with appreciation for history, turning the national and
military shrine as a living memorial. These data guided policy recommendations
to honor a Philippine contribution to the history of human emancipation. These
findings were revisited through the lens of the locals during the 2019 celebration.

Quality public education requires quality school heads. This study aims to determine the correlation between the leadership style of a school head and school climate in the context of public elementary schools in Quezon City, a highly urbanized city in Metropolitan Manila, Philippines. The study included 36 individuals—one school head and two school teachers from each of the 12 randomly selected schools. The data was analyzed using ordinary least squares statistical test. Out of the nine indicators of the three leadership styles and three school climate indicators, only the relationships between intellectual stimulation and two aspects of school climate—physical resources and security—yielded statistically significant results. The findings also show that school heads and teachers perceived social support as the most-provided aspect of school climate, and physical resources as the least-supported. A key policy recommendation of the study is to design training programs with special focus on critical skills involved in school-based management for public school heads to more effectively address the needs of the school community.

The COVID-19 pandemic is exacerbating the already dire state of inequality around the world, particularly for women. While the Philippines is considered as one of the most gender equal countries in the world, Filipino women still experience very high discrimination in different institutions, including the family, and with regard to physical integrity, access to productive and financial resources, and civil liberties. This preliminary descriptive study investigates whether the negative impacts of the pandemic on women were considered and factored in the Philippine COVID-19 response. It finds that the government’s pandemic response, both at the national and local levels, is not entirely gender-blind. Measures were taken to address sexual and gender-based violence. However, the government’s pandemic response glosses over other critical gendered impacts of the health crisis in terms of economic security, unpaid domestic and care work, sexual and reproductive health services, and empowerment of women.

Authoritarianism and neoliberalism in the time of the COVID-19 pandemic exposed the limits of development theory anchored on economic growth models in a globalized market of unbridled liberalization and privatization. The virus immobilized people and economies already beset by a global trade war and the rise of autocrats. The pandemic, however, has a disproportionate impact on people and countries, exacerbating inequality and poverty within and among countries. Philippine President Rodrigo Duterte rode on the wave of economic growth in a regime of low inflation with the country enjoying the so-called “strong macroeconomic fundamentals.” COVID-19, however, radically changed the global landscape and unraveled market failures. For the first time in decades, the economy shrank to its lowest and is now in recession. The country imposed the longest and strictest lockdowns while grappling to contain the coronavirus. In the midst of a crisis, Duterte ramps up repressive measures but was stingy on stimulus spending. Government’s response to address the pandemic in political, fiscal, monetary and human development measures would be looked into in this paper.

In the face of the COVID-19 pandemic, the Philippine government implemented distance learning through the Department of Education’s blended learning and the Commission on Higher Educations’s flexible learning policies for the resumption of basic and higher education classes in the Philippines for the academic year 2020-2021. However, these policies were criticized as “anti-poor,” with some sectors calling for an academic freeze instead. This policy paper examines these policies alongside its policy system through a stakeholder analysis. It then takes a look at whether the government’s policies are the appropriate response to such policy concern. Three key alternative policy options are also evaluated. Based on the policy analysis, several recommendations are formulated with the end view of ensuring that education would not be neglected in the new normal. Among the recommendations is the implementation of a short-term academic freeze preceding the resumption of distance learning classes to provide ample time for capacity building.