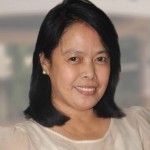 She has been recipient of numerous awards for the researches and books, book chapters and journal articles she has written, edited/co-edited on such topic as regulatory governance, competition and regulation, particularly of electricity markets; public sector reform, particularly, public enterprise reform, public-private partnership, privatization and public corporate governance; open universities and open educational resources in the 21st century learning; heritage conservation; resilient cities, e- governance, climate change adaptation and mitigation, and the quality of government services. The most recent of these awards and recognition are the 2016 National Book Award by the National Academy of Science and Technology, the 2016-2018 One UP Professorial Chair Award for Regulatory Governance, the 2018 Best Paper Award in the Climate Change and Communications conference in Graz, Austria and the 2018 UP Centennial Faculty Grant.

She is currently the President of the Pi Gamma Mu International Honor Society- Philippine Alpha Chapter, and is included in the 1991 eleventh edition of The World’s Who’s Who of Women, published by the International Biographical Centre, Cambridge, England.