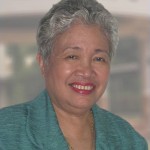 Professor Leonor Magtolis-Briones is Professor Emerita of Public Administration and currently Secretary of the Department of Education (DepEd) under the administration of President Rodrigo Roa Duterte. She previously served as Presidential Adviser for Social Development, with the rank of Department Secretary, under President Joseph Ejercito Estrada. She was the National Treasurer of the Philippines and concurrent Director of the Bureau of the Treasury under the Department of Finance (DOF), and formerly Vice President for Planning and Finance of the University of the Philippines. She also served as Secretary to the Commission on Audit (COA).

Outside the University, Professor Emerita Briones is the Chairperson of the Board of Trustees of Silliman University, a research university based in Dumaguete City. She is also the Convenor of Social Watch Philippines and was regent and chair-designate of the Universidad de Manila, a public university run by the city government of Manila.

In 2012, the Board of Regents conferred upon Professor Emerita Briones the rank of Professor Emeritus in recognition of her contributions to the field of Public Administration in the Philippines.