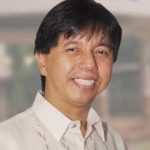 He has written three books, Innovations and Excellence in Local Governance (2004), Dictatorship and Martial Law (1988), The Philippine Presidency (1992) and has published papers on local government, development administration and civil society in local and international journals, including Asian Survey, Administrative Science Quarterly, Kasarinlan, the Philippine Journal of Public Administration where he once was Editor-in-Chief.