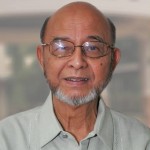 Dr. Jose Veloso Abueva is Professor Emeritus of Political Science & Public Administration who served as the President of the University of the Philippines System from 1987 to 1993 and Chancellor of the University of the Philippines Diliman from 1990 to 1991. His specializations include democracy and governance, political science, politics and administration, and decentralization and federalism.

He was the Secretary of the Philippine Constitutional Convention of 1971 and the chairman of the Legislative-Executive Military Bases Council from 1989 to 1990.  and as chairperson of the Consultative Constitutional Commission during the presidency of Gloria Macapagal-Arroyo in 2005.

He was also the Assistant Dean of the Institute of Public Administration, the predecessor of what is now the National College of Public Administration and Governance (NCPAG). During his university presidency, he established the Leadership, Citizenship, and Democracy Program (LCDP) in 1992 which would eventually become the Center for Leadership, Citizenship, and Democracy (CLCD).

Outside the University, he is the founder and former President of Kalayaan College. He is also a columnist for The Bohol Times.